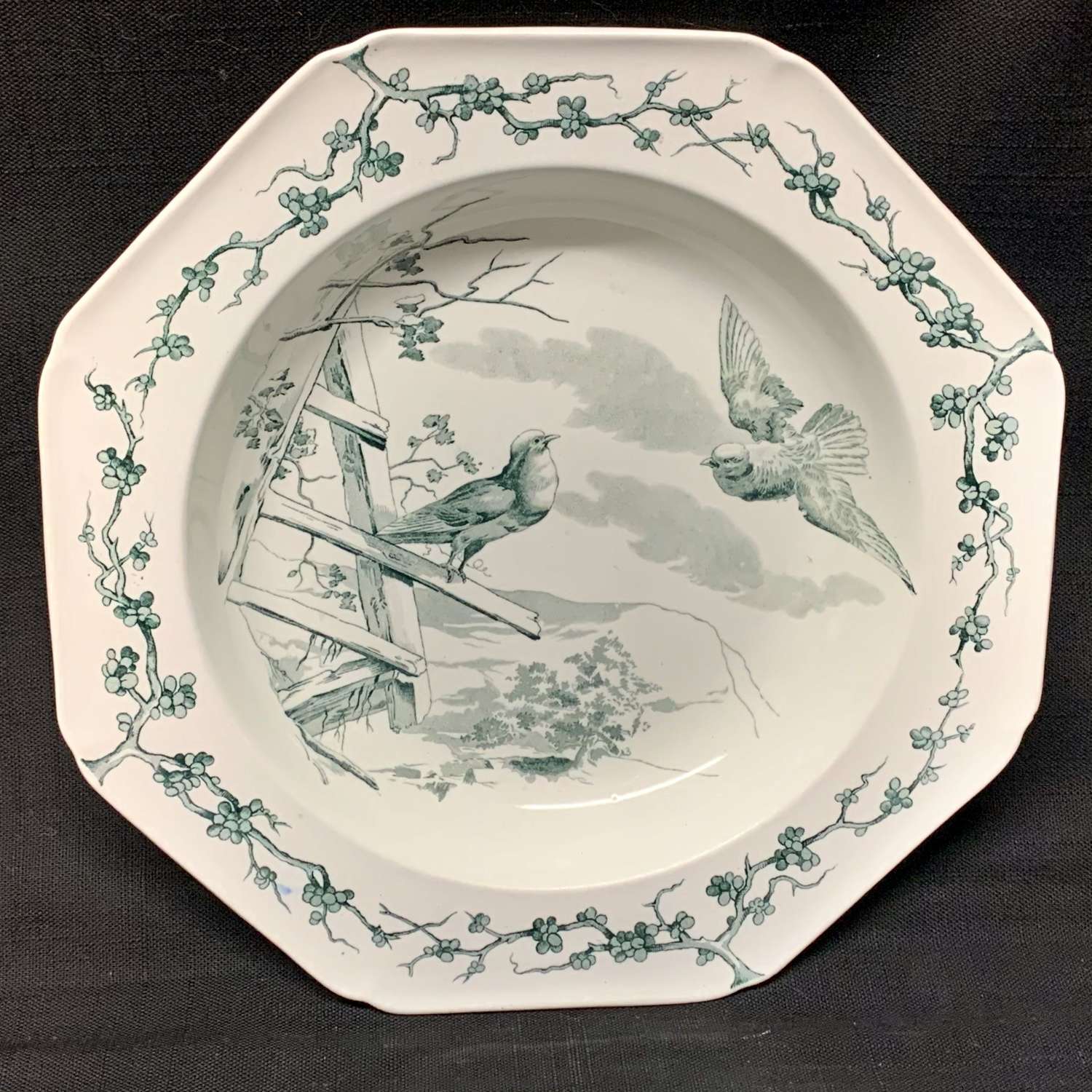 This is a superb and quite scare transferware plate registered around 1880. The plate measures 10 3/8 " in diameter. The plate is finely potted. The decoration is based on a woodcut etching from the highly coveted Nature series made by Brown Westhead and Moore, most commonly found on architectural tiles. It is transfer printed in grey black.

Two doves, White-coat and Blue-feather, lived in a dovecote. They

were brothers and were very fond of each other. White-coat was a

One day Blue-feather said to White-coat, "I want to see the world.

This place is very tame.

"Don't go, Blue-feather," said White-coat. "We have all we want to

eat here, everyone is kind, and we have a good home. I have heard

that in other places men set traps for birds or shoot them, and

that sometimes large hawks swoop down and carry them off. You

might be caught out in a storm and find no shelter; besides, it

would almost kill me to be separated from you long. You might be

able to bear it, but not I. Surely it is best to stay at home."

"White-coat, why do you make such a fuss about nothing? I shall

not be gone more than three days; then you shall hear of all the

wonderful things I saw. I shall tell what happened to me from the

beginning of my journey until its close. It will be almost as good

At this, they said. a sad good-by to each other, and Blue-feather

A dark cloud covered the sky. Blue-feather looked about for

shelter. He flew to the only tree near, but its leaves could not

keep off the driving rain, so his coat was wet through and

On the borders of a wood he spied some scattered grains of wheat.

He was hungry and saw no reason why he should not pick them up. As

he flew down, a snare was drawn about him. The wheat had been put

there to tempt pigeons so that they might get caught. It was well

was rotten. By using his beak and wings he got loose, but he lost

a few feathers out of his pretty coat.

A hawk saw him as he rose. Blue-feather was dragging a piece of

the string which he could not loosen from his leg. The hawk was

about to seize him. It seemed as if there was no help for him. But

just at that moment an eagle caught the hawk and carried him off.

Blue-feather flew as fast as he could to a high fence, where he

stopped to rest. He thought his dangers were over. He was very

While Blue-feather was sitting on the fence, a boy saw him. He

nearly killed the poor bird with a shot from his sling.

Blue-feather was just able to fly. His leg was lame, and one wing

was hurt, but he steered straight for home.

Late at night he arrived at his own dovecote, tired and hungry,

but happy to be safe at home again. He found White-coat waiting

The plate is in great condition, clean bright and shiny with no cracks, hairlines or repairs.  This fantastic transferware plate will make a gorgeous addition to any serious collection of Aesthetic movement wares. 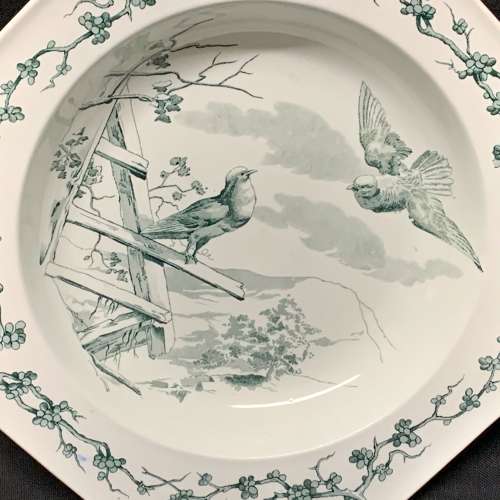 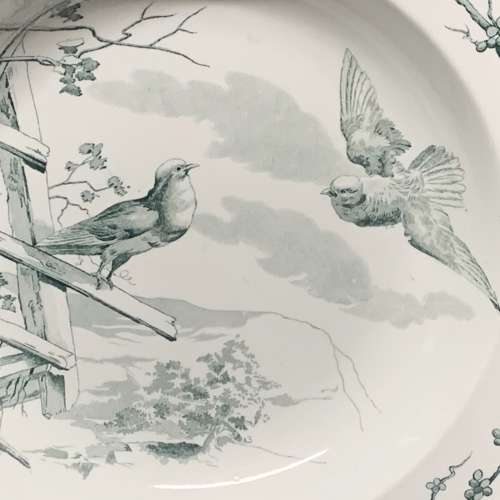 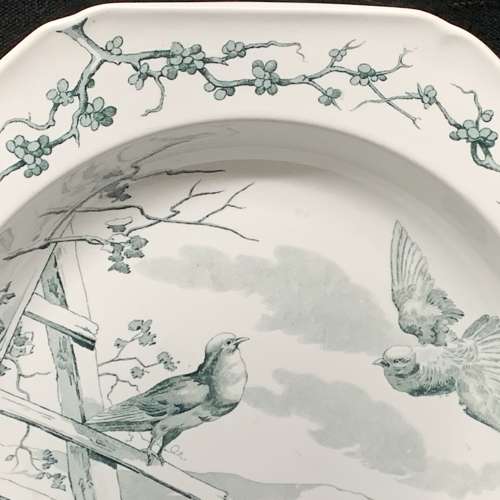 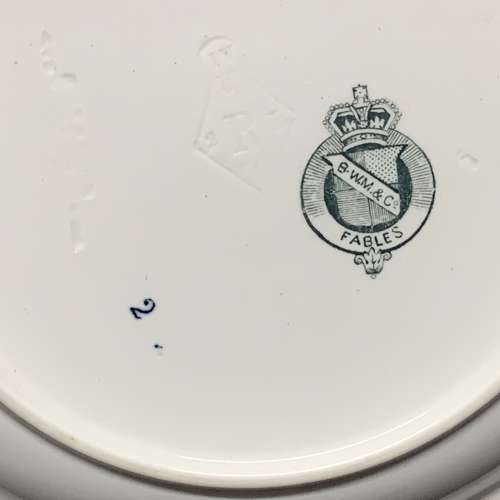 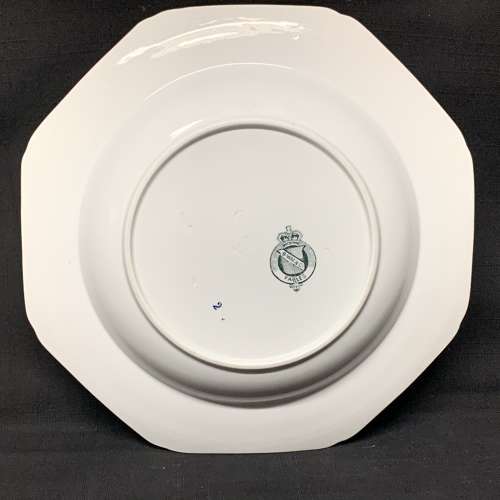